Mr. Chairman, Czech Railways are a traditional partner of ARCHITECTURE WEE K FESTIVAL, what made
you decide to participate in this event?

Since the 19th century, the railways and their constructions have been an important part of the landscape.
That is why we do not want to stay aside. Even though today the infrastructure is owned by the Railway
Infrastructure Administration, and recently we have assigned the station buildings to this national
organization. Still, we will be the owner of hundreds of smaller railway properties, including the Main
Station in Brno and Masaryk Railway Station in Prague.

What was the reason for selling the station buildings?

There was a number of reasons. Primarily, this is another step towards completing the transformation of
Czech railways. Station buildings are clearly a part of the railway infrastructure, which is to serve to all
carriers under the same conditions. At the same time, it is not possible for one carrier to pay repairing
and maintaining these objects, and for others just to use them free. That has been the case until now.
Our exhibition is called Organic City and Czech Railways as a national carrier also form its integral part.

Definitely yes. After all, our living space is not just architecture itself. A quality of life, especially in
large agglomerations, is made up by a number of factors, including transportation. Around 170 million
people travel by our railways every year. We are observing a growing interest in long-distance, as well
as suburban transport. This is of course typical for Prague, where many train links have indeed fulfilled
a function of urban transport in recent years. More than 100,000 people go to work, to school, or to the
doctor by our suburban trains every day.

And as far as I know, you are involved in the integrated transport system as well, aren´t you?

Yes. And not only in Prague. We are an organic part of these systems throughout our country, and we
want to continue in developing this cooperation with regions and cities.

You have invested a lot in new vehicles, for example on railways in Prague we see almost entirely the
new CityElefants. Is there still a space for further development?

There is still a potential for improvement. Whether strictly in terms of our services, such as speed
and comfort of check-in, or adding further connections, which, however, does not depend on us. The
ordering parties, we and our passengers, all of us do show interest, but we are encountering the already
mentioned infrastructure. At peak times the suburban trains operate at 15-min. intervals, and given the
condition of the tracks and their capacity, it is often an absolute maximum.

So in your opinion, the state should invest in the modernization of tracks around the cities?

In Prague and Brno also inside the city. If you go to Paris, Munich, or London, there are new urban
railways and stations developing, connecting the suburban and urban transport. In city centers, they are
of course lined in tunnels, thus also fulfilling the role of subway.

Perception of transport in the city is also influenced by design of trains, just as the case is with
architecture influencing the station, don´t you think?

Definitely yes. People waiting for the train should feel well while waiting at the station, as well as on
arrival of their train and when staying in it. If the train does not go through tunnels between soundproof
walls, it also completes an image of the city it passes through. Therefore, it is no wonder that many cities
require a distinctive design for their trains. Together with our suppliers, we cooperate with a number of
designers and well-known architects, who are professionally engaged in transportation. Thus, they can
combine the architecture and design of both the buildings and the trains.

Let´s get back again to the railway buildings, are we going to see them all repaired soon?

That is a question for the new owner. Generally, it can be said that the state has more possibilities to
raise money for their reconstruction, including grants from the EU . We did our best, for example the
station buildings in Třinec, Poděbrady, Týniště nad Orlicí or in Uherský Brod have undergone a complete
reconstruction. On many others, we have prepared projects of modernization, and thanks to their use
RI A will be able to reconstruct these stations quickly. It will have a positive effect for us too, since the
customers will not be frustrated when getting off the new train at a shabby and unsightly station.
Selling of station buildings also freed your hands for your core business, as far as Dan Ťok, Minister
of Transport, has mentioned so.
This is what I consider one of the positives of this transaction. We have one less thing to deal with,
and thus we can focus more on development of international transport, where we foresee a great
potential. We are also still improving our services. From around the middle of August, our customers
can try out a new website with eShop, and give us feedback before starting its full operation. We are
going to buy hundreds of new portable cash registers for train escorts, thus allowing wider use of credit
card payments and accelerating the check-ins. Those are the „little things“ that lead to satisfaction
of customers, and to their loyalty to us. 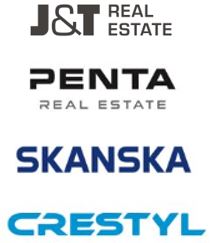